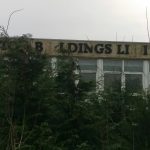 I have fond memories of my visits to Compton Buildings, Fenny Compton. A warm welcome was guaranteed and as you were led across the open plan office you felt valued by all that greeted you.

This was the Compton Buildings of the nineteen nineties and early noughties not the hellish mess that Marshalls PLC brought to Southam.

The factory was peculiarly situated in a picturesque rural setting with a small village consisting of very narrow boards and medieval buildings close by.

Also found on these premises were manufacture of cedar greenhouses, the woodwork shop did in fact produced garage components as well as the greenhouses. During earlier visits you would find a huge tank for dipping the assembled components which was later replaced with a spray booth.

Found on site was the fabrication of all the garage steelwork which included at one time the inhouse manufacture of their own garage doors. Doors were supplied in shiny galvanised finish and the garage A-frames were sprayed in a toxic red oxide.
Compton Garages embraced old and new garage panel technology and in one building panels were being vibrated on a table and in the other a conveyer driven line made the spar garage panels.

There was a show site in front of the offices which often carried building prototypes and across the road an overspill of concrete garage panels and parking for HGVs.