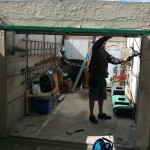 It is rare to come across installation instructions for the Compton Garage, for sure none were produced from 1990. Those who still have a working memory of the Compton Building are almost certainly 2nd generation or apprentice taught.

Most installation teams comprised of two men or sometimes a man and his female companion who would arrive on site fully expecting the building to be set out on the concrete base in manner that would aid the installation. They had the delivery driver to thank for this foresight who most often delivered alone and who might very often have to ‘handball’ the garage panels to the base.

A routine inspection of the floor follows which would include putting down a chalk straightedge and a level. Any fall greater than 15mm might result in an aborted installation, likewise any shortfalls or breakages and the contractor might walk away.

Most installations commence from the rear corner, followed by the back wall and opposite side. Once a roof support is in the place the walls should now be self-supporting. Moving forward on each side, further supports are added until all the concrete blocks and A-frames are in place. The door might then be added followed by the roof purlins. Now follows the fascia boards and finally the roofing sheets go on. This leaves only the mastic seal of walls in the case of spar garage whilst other types of construction the mastic is laid between the panels during assembly. The internal perimeter floor should be wetted before applying an internal sand/cement fillet preventing water ingress.